—In memory of Pedro Joaquín Chamorro,

whose blood gave Nicaragua the means to conceive her freedom.

A hero rebelled against the might of the Black House.

He struggled against the Lords of the House of Bats,

against the Lords of the House of Darkness

where, deep inside it, only sinister thoughts exist.

The Maya called this man Ahpú—“chief” or “head man”—

because his bold feet led the way and broke new ground.

Often he outwitted the oppressors,

but finally he fell into their hands.

(O shadows! I have lost a friend!

Rivers of people cry besides his remains.

The old day keepers had prophesied a time of desolation.

They said it would be “a sad, sad time

when the butterflies have all been collected,”

and words would no longer transmit golden pollen.

I imagined it as a time of treacherous light—

a cold, dying sun and the long caws of birds

But it came as a morning, a falsely brilliant

with birdsong, and then it sprung:

that dry blow from deadfall

From their barracks, from the House of Weapons,

the Lords of the Obsidian House spoke out:

“We will destroy you, rip you into pieces,

and bury the memory of all you were.”

And they beheaded the liberator.

And commanded that his head be mounted on a pole...

But suddenly the pole became a tree

covered with leaves and fruit,

I write on this tree—

Xicalli in the Nahuatl tongue

leaves with a sacrificial design,

a memorial to martyrs,

“the tree of skull.”

This is the plant

that gives dignity to the plains.

Its fruit is the Indian’s cup.

The campesinos call its fruit el guacal or la jícara—

the cup of all we drink

and decorate it with bird carving—

because we drink the song

the fruit rattles in our fiestas as maracas and sonajas—

because we drink the music

since ancient times, in the dialect of the Chorti Maya,

the word ruch meant both

“calabash” and “skull” (just as it does today)—

because we drink thoughts

But the Lords of Darkness

declared: No one shall approach this tree.

No one shall pick its fruit.

And she whose name was Blood Girl heard this story.

“Why can’t I know the miracle of this tree?”

So she jumped over the oppressors’ warnings

and approached the tree.

because the woman is freedom that provokes action

and the hero is unhindered will.

Then from the fruit, from one of the heads on the breaches, came a

“What do you want?

Don’t you know these are the skull of the sacrificed?

Could it be, do you want them?”

And the maiden replied, “Yes, I want them!”

“Then you must hold out your right hand!” spoke the head.

And the maiden held out her hand.

And the skull spit on her palm.

The saliva disappeared at once and the tree spoke.

“In my saliva, I have given you my ancestry.

Because the word is blood

and blood once against is the word.”

And this was the beginning of our civilization

This is how dawn begins, germinating each time

from the hero’s breath.

They were the twins who invented Corn—

the bread of America, the grain

that becomes the communion of the oppressed. 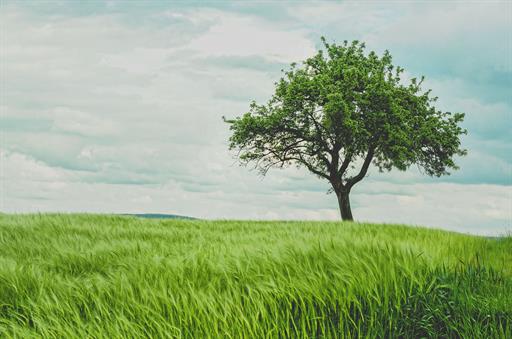